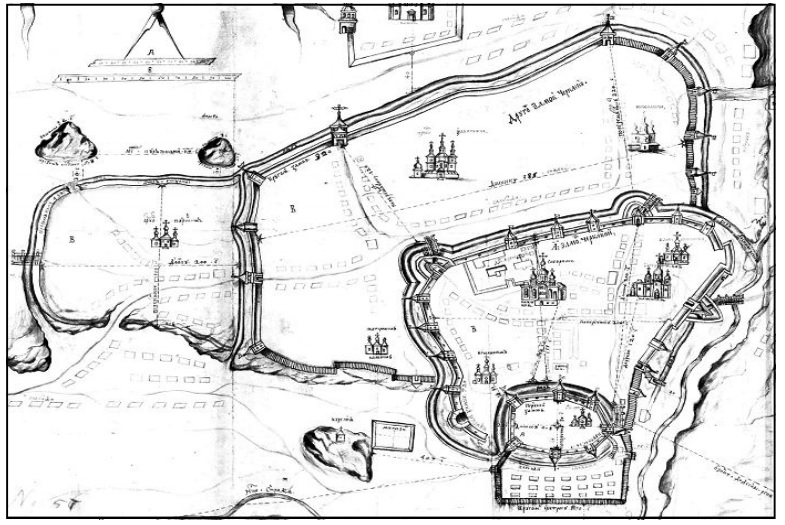 This article is devoted to the development of Chernihiv fortress during the second half of the 17th century. Any town of medieval Europe and Russia had its own particular type of urban development. The fortress occupied the main place in that development. The most important sources for the study of Chernigov fortress of the 17th century are “Abrys Chernigova” 1706, maps of the 18th century towns, verbal descriptions and archaeological excavations. Chernihiv became the regimental city in 1648 and its fortress had repeatedly turned to the epicenter of battlefield. In the middle of the 17th century fortress consisted of Verkhniy Zamok and, in fact, Fortress. These fortifications were the ramparts of the 10th-13th century line. Forstadt had been further strengthened in the 1670s. This process had been associated with the increase of the city population. These fortifications were resuscitated remnants of the ancient fortifications of the Okolniy Grad. The slight strengthening — Ostrog — was housed under the Verkhniy Zamok. Russian troops garrisoned town were there. Thus, till the end in the 17th century fortifications of the city consisted of Verkhniy Zamok, Fortress, Forstadt and Ostrog. The fortifications of Verkhniy Zamok, Fortresses and Forstadt were made of wood and soil. Ostrog was fortified from the stockade. The fortified area of Chernigov was 48 hectares. So, Chernihiv fortress was one of the biggest on the Left Bank Ukraine in the 17th century. Firstly, it was due to the fact that in the late 17th century Chernihiv was a great economic and political center. Secondly, its importance as a military center of the Hetman State had increased during that period.

Number of views: 809
Previous:
Who destroyed the Byzantine historical and cultural heritage?
Next:
From the experience of effective teaching of reading
Resources