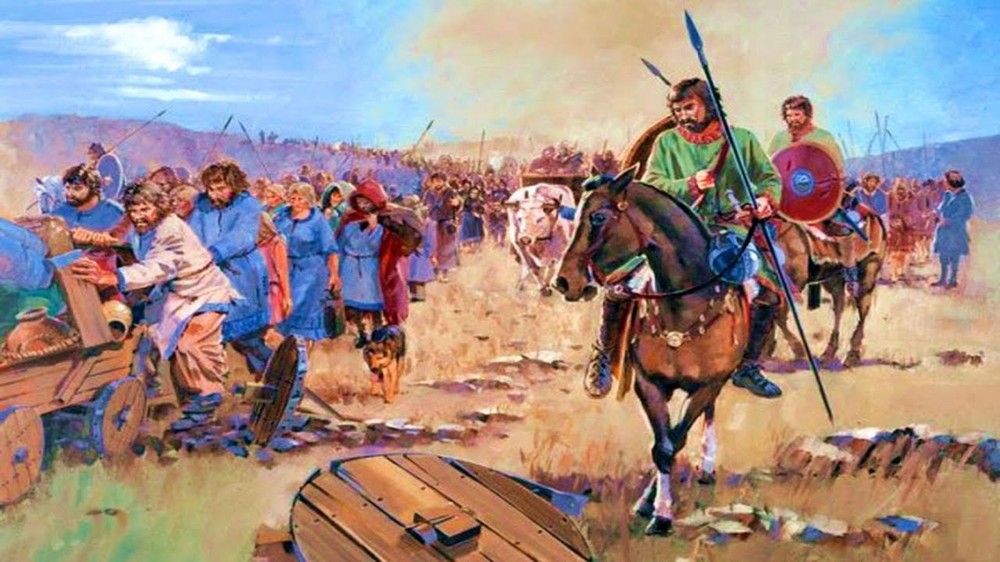 This article is aimed at identifying the eastern border of polychrome style objects that have been culture indicators demarcating the influence area of the Hunnic cultures after receiving new materials from 9 burial complexes in the Western Siberia and Northern China during recent 50 years (Tugozvonovo, Eras'ka, Sopka 2 (tomb № 688), Ivanovka 6, Timeryazevskii kurgan burial 1, Krokhalevka 23, Kro-khalevka 16, Arzhan-Buguzun, Boma). Analysis of burial-memorial complexes, containing polychrome style objects, helped to identify both the burials of cultures from other regions, that is belonging to the Huns and the burials representing local cultural traditions. The Hunnic burial-memorial complexes belonging to a different culture were a source of cultural innovations and transformations, which in their turn led to a change in the culture of the vast region. The distinctive features of those burial-memorial complexes, different from local burial grounds, are the following: large depths of the ground grave pits, ring deformation of the skulls, a number of polychrome style objects, and single graves. Polychrome style objects marking the eastern border of their distribution are similar in their stylistic peculiarities. Identification of geographical coordinates of the burial-memorial complexes with polychrome style objects, led to draw the eastern boundary of their distribution, which is in the area between 80 and 90 degrees East longitude. The most easterly is burial-memorial complex Arzhan-Buguzun, located at 89 degrees East longitude. The eastern border of the polychrome style objects distribution has made it possible to put forward a hypothesis about the inclusion of the Western Siberia archaeological cultures in the early Middle Ages in the range of cultures belonging to the Hunnic cultural unity characterized by prevailingly West direction of cultural contacts, and draw a border with the cultures of predominantly eastern direction of cultural ties. It leads to dividing the Eurasian continent into two largest multicultural super-regions -Europe and Asia, and it must be noted that their geographical boundaries do not coincide with the cultural boundaries, which are constantly changing in space over time. Such inclusion of huge territories (of Western Siberia) in global historical processes of the Great Migration Period allows to take a fresh look at the early Middle Ages period of the region, the history of which is closely connected with the turbulent historical events of that most interesting period of the world history, when the basis for most modern ethnicities was laid.

Number of views: 1214
Previous:
Anthropological Approach in Researches of the Genocide-Holodomor in Ukraine 1932-1933
Next:
Separate human remains on settlements of forest-steppe Scythia: review of interpretative approaches
Resources