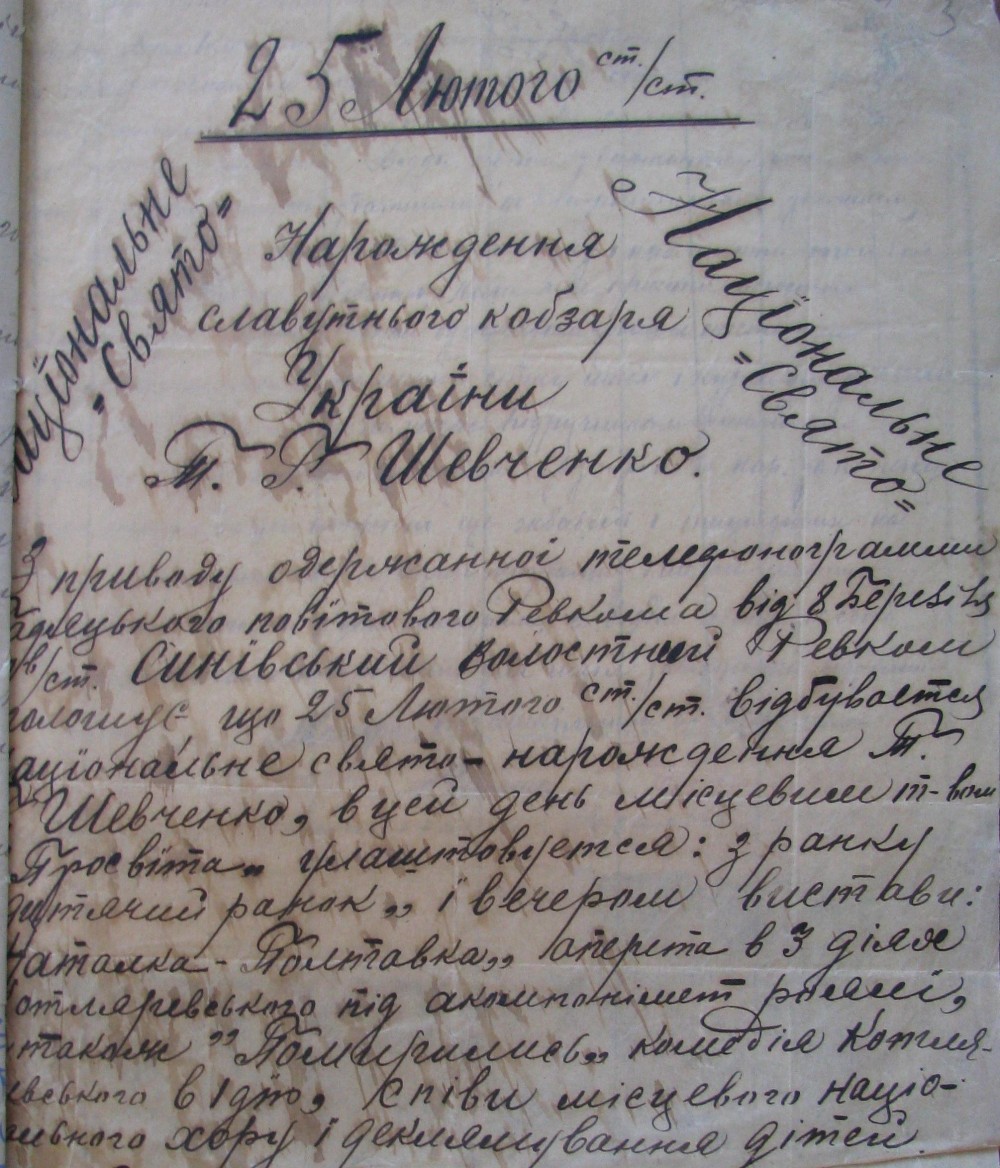 The article covers the peculiarity of activities and the emergence of the “Prosvita” fellowship centres on the territory of the modern Lypovodolyna district of the Sumy region during the period of the Ukrainian revolution (1917-1921) and the first years of the Soviet state. Such forms of activities of the fellowship as organizing the primary education, conducting theatre performances, maintaining educational libraries, forming the historical consciousness and creating the image of the poet Taras Shevchenko as a “father” of the Ukrainian nation are examined within the article. The national character of the fellowship is emphasized in the current publication. The fact that the “Prosvita” fellowship centres in the North of Gadiach county were established right after the Ukrainian Central Rada emergence in Kyiv is stated. During the period of UNR the “Prosvita” fellowship centres of the Lypovodolyna district eagerly supported the revolutionary parliament of Ukraine and its policy. Actually they were the representative centres of the Ukrainian Central Rada in the region. Concerning the relationship of the “Prosvita” fellowship with the Bolshevik authorities the article defines that the latest, though considering the fellowship centres anti-revolutionary, did not counteract their activities in the first half of 1919. The occupation of the region by the Russian Denikin Voluntary army caused the escalation of the repressions against the members of the fellowship. Since the middle 1920 the Bolshevik authorities began the practice of state controlling. Due to the activity of the Bolshevik political education 22 organizations had been established on the territory of the modern Lypovodolyna district by the beginning of 1922. The articles comes to the conclusion that during its short six year history (1917-1922) the “Prosvita” fellowship of the Lypovodolyna district provided the cultural ascension which accompanied national-liberation struggles of the Ukrainian people. Moreover, the “Prosvita” movement turned into the main organizational form of engaging the vast strata of the society into the active participation in that process.

Number of views: 460
Previous:
Prolegomenes to a Mythological Bestiary of the Romanian Fairytale (II): The Stag
Next:
The Contribution of Academician of the as of Ukssr V.S. Gutyrya to the Development of Chemical Science (1932-1983)
Resources