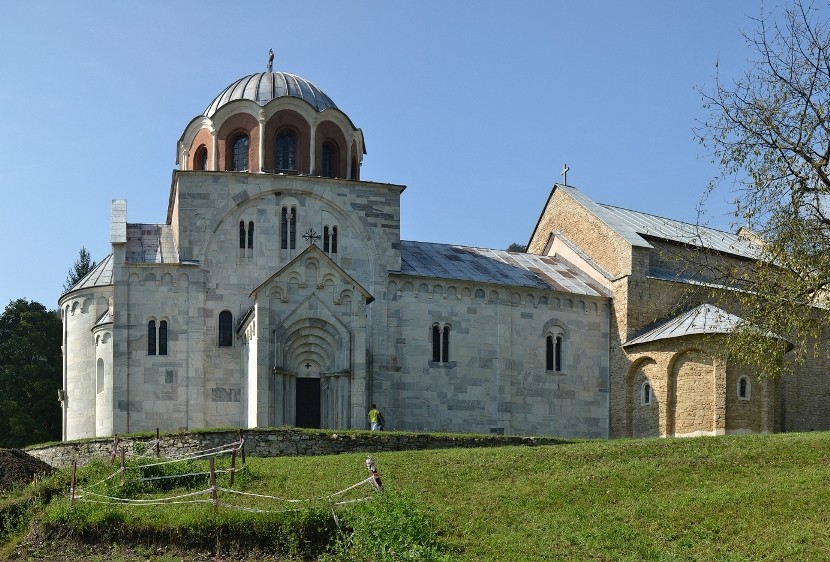 Serbiens byzantinische Mоnumente [The Byzantine monuments of Serbia], an illustrated book by the notable scholar Felix Kanitz published in German and Serbian in 1862 is one of the key verbal-visual artworks of Serbian culture from the mid-nineteenth century. Our research was focused on the analysis of the illustrated drawings that were made as the result of the field research conducted by Felix Kanitz in Serbia in the period from 1859 until 1861. The large format of these drawings indicates that the book was conceived like a large-scale monument in the service of creating collective patriotic images of the past. The title of the book stems from the European culture of historicism and it confirms the neo-Byzantine trend of that time. The illustrations of landscapes and ancient Serbian churches fit into the European framework of the culture of historicism which showed a renewed interest in Byzantine and Serbian medieval heritage. The verbal and visual language suggests the need for an analysis of several artistically made illustrations of ancient medieval monasteries and churches such as Manasija, Lazarica, Žiča, Studenica, the church in Smederevo, Gornjak and Ravanica. The images of nature and material remnants of the past defined the objectives of the Serbian academic and cultural elite towards the shaping of a modern model of national identity. Following the growing popularization of richly illustrated books in color, Kanitz offered a modern visual insight into the Serbian medieval period shaped by the fact that his illustrations were created somewhere in between the observed (reality) and the presented (imagined). Kanitz’s staged illustrations became part of the continuous course in the practice of cultural heritage preservation in Serbia in the second half of the nineteenth century. Despite a degree of artistic freedom when presenting real in situ structures, Kanitz’s drawings were used as visual pieces of evidence in the service of the protection of medieval heritage. The images of nature and markers of the past were shaped as both positivistic evidence and creative artworks, bridging the space between reality and imagination. Shaping them as visual agents in the service of the homogenization of national identity, Kanitz created images that would go on to be used as the basis for future cultural protection projects (for instance, in the restoration of the tower in the courtyard of the Manasija monastery). In line with the culture of historicism in Europe and the Biedermeier style in Central Europe, his images of ancient churches and monasteries undoubtedly set the foundation of collective memory with medieval memorial topoi at its core. The illustrated landscapes incorporate nature, architectural structures and material remains of the past, and thus become parts of the picturesque image of the past. Kanitz’s representations of ancient monuments undoubtedly influenced the process of medieval revival in the modern Serbian state, memorializing them in the form of the first artistic illustrations of Serbian antiquities in monumental format.

Source: Borozan I. (2019) The medieval revival and historical topographic representations in the Byzantine monuments of Serbia by Felix Kanitz. Zograf. Vol.43: 197-214

Number of views: 48
Previous:
Two initials in the Miroslav Gospel (fol. 26v and 120r)
Next:
Images of Cossacks and Inhabitants of the Hetmanate of the 1780s – History of the series of drawings from O.Shafonskyi manuscript
Resources