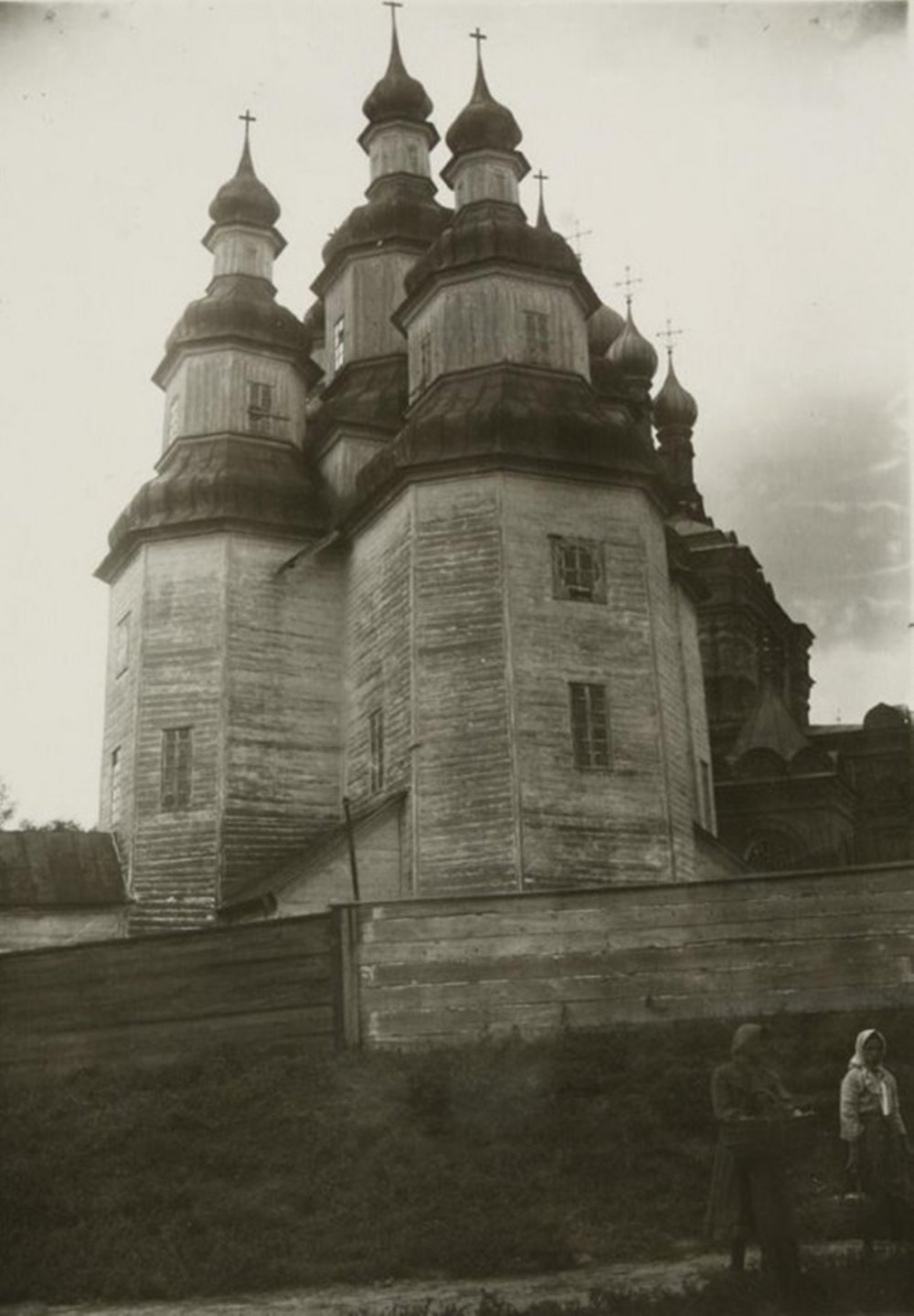 The article traces the history of the unique cult construction, a masterpiece of wooden architecture — the Intercession Church. It was built in 1764-1770 in Romny, the last ataman of Zaporozhye Sech Peter Kalnyshevsky and the Cossack representative David Chornyi gave money for this building. The church was located on high ground, in the plan it had the shape of the cross and consisted of five baths: one central and four laterals. The basic building material was selected oak. In the first half of the nineteenth century the major renovation was made in the Intercession Church. By the end of the nineteenth century among the parishioners and the clergy of the idea to build a new stone church was born, destroying the wood one. It was supposed to restore and transfer only the iconostasis, which was a unique work of art. These events, among others, were described by a well-known local historian I. Kurilov in his work “Romenskaya Antiquity” (1897). In 1900 a wooden church was examined by a famous archaeologist, art historian, one of the founders of museum work N. Makarenko. He described his notes in one of the first publications of “In the homeland of the last Hetman of Zaporozhye P. Iv. Kalnyshevsky” (1901). Later N. Makarenko conducted a detailed analysis of art criticism of both the Intercession Church and its interior decoration; he has published an article entitled “Monument of Ukrainian art of the XVIII-th century” (1908), thanks to which the temple became widely known. The author emphasized the need to preserve the church as a masterpiece of Ukrainian Baroque architecture. For this purpose N. Makarenko and P. Pokryshkin implemented a unique scientific experiment — the transfer of the Intercession Church from Romny to Poltava and the restoration of it in the new location in the same forms. However, over time the structure again demanded restoration. A new stage of the struggle for the preservation of the temple began after the revolutionary events, the separation of church from the state, an active attack on the religious communities. At the same time the formation of societies for the protection of the monuments and art was held. Starting from 1918 the need to preserve the Intercession Church had been raised repeatedly at meetings of the Archaeological Committee, commissions and societies. However, due to the lack of funds to do this would be extremely difficult. At the turn of 20-30 years of the twentieth century the church was closed. Taking into account the unique structure and trying to save it from ultimate destruction the exposition was placed there, later the structure was adapted for household needs. In 1943 the church was completely destroyed. The latter, who has studied this architectural monument, was S. Taranushenko. The Institute of Archaeology NAS of Ukraine stores the documents that reveal all the stages of the struggle for the protection of the monuments. Among them there is a letter written in 1923 by the Director of the Poltava Museum M. Rudinskiy to various authorities with the purpose to draw attention to the destruction of the Intercession Church and the need to protect it once again. In full volume it is published for the first time.

Source: Nimenko N. (2016) The Problems of Protection the Cult Constructions in the 20-Ies of the XX-th Century (on the Example of the Intercession Church in Poltava). Sumy Historical and Archival Journal. №XXVI: 47-54

Number of views: 367
Previous:
The Honoring of Petro Kalnyshevsky Memory in Ukraine
Next:
The Correspondence Between S.M. Kozhevnikov and J.P. Den Hartog as a Source For the Study of Scientific Collaboration Between the Mechanicians (to the 110th Anniversary of Sergei Kozhevnikov’s Birth)
Resources